It's right, raise of the curtain on a very special day. I attend still not awake to a colorful history. The sky leaves blue night to turn orange on a background of chinese shadows. Coconut trees ? Pagodas ? I 'm widen my eyes, where is the water, the sky, only the birds know.
As an index, Thetys flats on a still lake of silence. The Big Blue I covet is fixed, there just behind the island. The time is stopped. I have to go get drunk from blue till no end.

Fitted in a jiffy, here I am with the dinghy spinning towards the pass. Only a small word to Nath betrays my morning break. I drop the anchor. Bubbles surroud me and then disappear and the morning of the world appears. Intact, with no trace of the man or time. Air passes through my snorkel, I slide slowly over the blue planet. A shadow, a wing beat, an eagle ray greets me, lower a levitating barracuda makes faces to a sea turtle more curious than fearful. A shoal of jacks dressed by my benefactor sun ray are beautiful and twirl around me. Come on ladies, Nath will appreciate moderately that we play together!
My ego call me to order: "Heho, a big, a very big, remember?" " Yes, yes I will look at it".

Gunpoint begins to sulk, my delighted eyes are too distracted to identify "the" target. A small barracuda, my arrow leaves, shot in the head, the thread unwinds and my scheme sets up : bait to bring "the one" of the day before. Not that he was big, he was "huuuuuuuuge", so much that I had not seen it: aiming at a beautiful grouper I saw the rock beneath it... move. A moving rock ? Not a snapper, 30, 40, 50kg... Regardless, the largest ever seen, one that all Brunos dream. I execute my plan : the pieces of barracuda white flesh flow under the dinghy, swirling. One grouper, then two, then three, invite themselves, happy of this organized breakfast. They are beefy. Under me, eighteen, twenty meters ? Still no sharks, I take a long, deep breath, tumble and dive to see my three visitors. My watch alarm sounds 18.7 m. It is there, huuuuuuuge , mutual surprise, our eyes met , but I'm not ready , it is too beautiful to kill him for a photo ? I am with him, silent dialogue with mutual understanding, he moves slowly, I say goodbye, filled by this meeting.

Nath is awake and prepared breakfast with love. In glasses, mangoes and oranges have lost their fight against the blender while a warm pineapple cake fills the air. I tell her this incredible diving. Then we take off the anchor towards Glover's Reef, one of the three atolls in eastern Belize.

Thetys track a few wrinkles on a Caribbean Sea more blue than blue. Engines purr and I put the lines in the water by anticipation. Red lure, yellow ? Good distance or not? I adjust, again and again. 45m for the smaller lure and a good 50 meters for the biggest. Mock hunt, ideal trap for swordfish indeed a marlin. Marlin, "Graal" for fishermen, I dare not think about. Some friends boats have fished for swordfish, my ego recalls once more to me. I adjust again the lines and daydreams about a good Big Mac, eyes lost in the beauty of big blue.

When suddenly, the magic reel rattle, the one that gets the adrenaline pumping to all the "Big Game Fisher", sounds. Which lines is taken, the small or the big ? My ego is pleased, this is the Big, the one for the Graal !
The line runs at breakneck speed to the sound of the pawl. Nath slows, engine in slow position. 400m, 300m, 200m coil empties then my heart is racing. Brake or not ? Absolutely not, all could break. I organize the fight: "Nath , you know it can take an hour or two ! Bring the other line, and outputs the hook over the harness please !". Tactical and physical fight begins. More than 100m of wire, and... he jumps out of the water !
The rostrum right to the sky, contorting as to provoke me, and falls into an incredible bunch. He saw me , I saw him. The line stops running, he gets out of breath, it's time. With gloves I start rewinding the line, when he doesn’t pull, but the line must always be tense, that's the rule. 50m of line resumed, the fight is measured on the coil which empties or fills according to the advantage that takes one opponent on the other.

Nath gently brings it along the hull, his strength dropped, I hook it, Nath takes his head out of the water to weaken it even more. He shall not resist. 2 hours, it is on Thetys. The baby measures about 2m20 and weighs over 100kg. We kiss, pride of ourselves, accomplices in this single moment.
The photo session can begin.

Arrived victorious on Glover's Reef, a fishing boat is anchored. I bring to them our catch to offer them, because for them it is a bargain and a nice amount of money back to the port. Congratulations, they give me two lobsters to thank, one last photo, it’s done.
End of a very special day.

20 minutes I reel , it is very hot, the sun begins to burn my neck. Nath,  model assistant, brings me a T-shirt and sun screener . Ziiiiiiip, the line recovers, he fights. I reel again and again, the rule, do not forget the rule, tensed line. I sweat, I sprayed, my arm paralyzes , 200 m of line earned, it smells good. It lashes in seconds and takes me almost all of the coil. We're back after an hour to start again. To taunt me it still blows, the camera is not ready, too bad. It's like in stories on TV, except that it is I who hold the cane. The sun is lead, we must all reel again. "Nath, you want to try ?". Nath does it, low speed (this is a Shimano Tiagra 50 WLRS (Advertising !)), it is less hard. I relaxes the arm, I do not think it could be so physical. A question comes to my mind: "We try to keep it or release ?".  The professionals take a picture, take off the hook with pliers and release their catch. Why not, it will never stay in the fridge, and we’ll have finished our loop around the world that it will still remain.
1h20 that we battle, Nath is always reeling. The rule, do not forget the rule, tensed line. Yes but how to do, how will he react to the boat proximity ? And it can be dangerous, I saw a guy on Youtube be pierced by a marlin that jumped out at the last moment... Well then we will eat it !

Nath begins to weaken. "Listen, when it will be close, I will hook it, and you will keep the tension". I take the reel. He seems to have lost its strength and let me reduce the line. Even a little effort, it is there, but we do not see it. Ziiiiiip, he goes again, "never give up". Oouhaaaa , it jumps back , it is beautiful , but a little too strong. I increases the brake force (adjustable on the Shimano Tiagra 50 WLRS (Re -Advertising !)), it fades, I continue, the coil grows again and again. 1h45 , a silver reflection, I realize finally, Nath is at the camera, it is less than 10m of the back of Thetys, lying on the side, spinning in a crystal-clear water as ever, incredibly beautiful and tragic picture: the end is close together victory, it is beautiful and especially huuuuuuuuuge ! 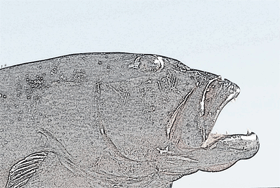 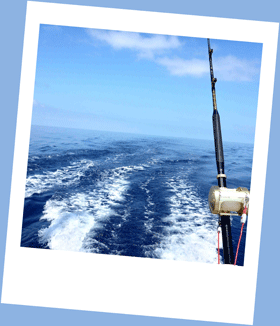 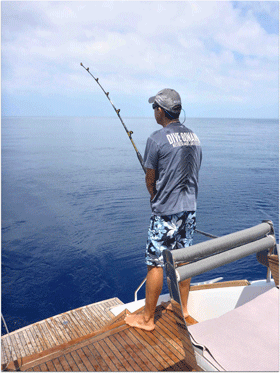 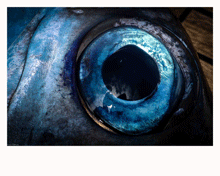 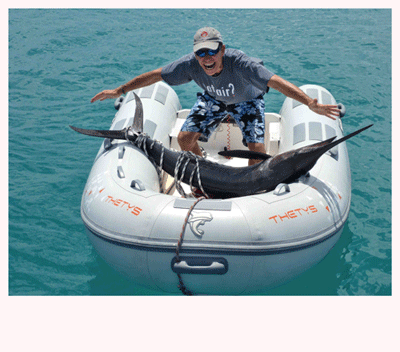 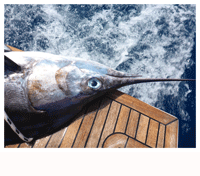 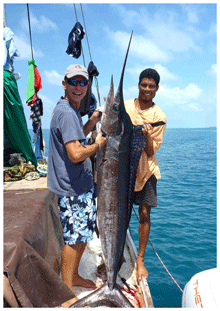 A player ray of sunlight passing through the coconut trees of South Water Cays South called me and said, "Bruno, this is the day ...".
I'm in a dream, the sun's rays do not speak ! And then it is 6am... I turn around and this little dude becomes tickler, warmth browsing my back, I finally admit defeat. Silent output of the bed, the skipette is also dreaming ... definitely ... of me.

NEWS FROM THE FISHERMAN