Are you more Mayan or Aztec ?

New navigation new destination, Thetys continues its ascent on the west coast of the Caribbean.
Leaving Southern Belize, we need a little more than 24 hours to rally Puerto Aventura on the Mexican coast, driven by a Gulf Stream very effective. Early afternoon Thetys apprehends the entrance to the marina, narrow and tricky. Inside it's Disneyland, in this ultra tourist complex that houses many dolphins boats. Very few sailing boats, lots of palm trees, small buildings in a spanish style, motley restaurants, flashy mini-markets where there are only chips and drinks ... an "American" atmosphere very clean and stylish will serve as a base camp to this land stop. Fuel filling and immigration papers are quickly expedited via an agent that leads directly the authorities to the boat. Simple and effective for a very reasonable cost.
Who said land said ... vehicle. A strange sense of freedom hugged us when we become happy tenants of a Japanese yoghurt pot ! With our little Asian five times faster than Thetys, we start to explore the neighborhood: the seaside resort of Playa del Carmen. Nothing like walking at night along the famous Quinta Avenida to get into the Mexican atmosphere, where crammed well aligned colorful ceramic skulls and Mexican hats, showy t-shirts extolling the virtues of next door: tequila bars. In tune after some well balanced margaritas, we enjoy a "carne argentina" in terrace to watch the crayfish colored crowd moving from bars to restaurants, challenged by souvenir sellers.
Enthusiasts, we design our future plan of tourist route. Program in the next few days: the climbing of the Aztec and Mayan temples of Yucatan, diving in the heart of mysterious cenotes, night stopovers in colonial towns with evocative names, Merida and Valladolid ... Not to mention Cancun, the world Mecca (with Ibiza) of the 'dance party' till dawn!

Moving to Coba, our first visit to Mayan temple. Great surprise, we are virtually alone to explore this site scattered in the heart of the rainforest. The course is explored by running bikes or tuk-tuk (3 wheels + 1 driver) ! The tunnels lead to green spaces barely emerged from the surrounding and invasive vegetation, where stands the famous pyramids. The highest of the site dominates the landscape of its 32 meters. New astonishment, here you can climb the archaeological ruins! By moving up on very steep and almost antique stairs, tourists land up breathless after several breaks. Flip flop slide on blocks polished by time. And the big braided rope secured over the entire height of the steps is used in the way down, for cautious guys gliding their ass from one to the other, clinging to the lifeline that will bring them back to the mainland.

The next day, we go on the site of Ek Balam. Always nobody on the road, and parking is almost empty. This time we decide to use Juan services, to better understand all these old stones: cemeteries, headstones, places of life, sacrifice, worship, myth or reality ... Our chatty guide (in English) participated in excavating the ruins. After a two hour visit, the Mayan have almost no secret for us : their customs, their lives, their religion, their fears and even their pseudo-disappearance... provided to join one or the other of all these conflicting theories. Intertwined at will, they add an indefinable charm in the historic blur, reinforcing the atmosphere a little supernatural!
Architecturally, the place is awesome, especially with its main building: as a large house perched on high, to escape what? We quickly climb the stairs to the top, leaving Juan cure his vertigo halfway. Curiously three mounds of vegetation covering other ruins a few hundred meters away have not even been touched in previous research. Juan explains the lack of funds, including international. Mayan mysteries are not about to be clarified, and it is good for us, adding to the palpable enchantment.

Arrived in the late afternoon in Valladolid, we cross the suburbs with no charm to the small center around a typically large South American green and quiet place. On the other side seat one of the six remarkable churches of the city, the local specialty apparently. The charm works, and the “Meson de Marquez” welcomes us for a very reasonable price, on the same place. Impeccable for the first night away from Thetys for four months!

Neighbor for a few kilometers, the cenote Xkeken from the Dzitnup site comes into its own when we sink into the depth of the earth. A flight of steps leads us away from the usual warmth of burned land, replaced by cool and aqueous “plop-plop”... A turn later, the light falls from the sky through a vegetal hole, lighting a natural pool that bathes the cave. Between deep blue and ice blue, we dive into water that grips us. Apnea in the mineral pool where stalactites dripp from tree roots growing in the floor above. Surreal!

Merida, our next point of sleeping on the map of treasure turns out to be disappointing. The somewhat historic and tourist center is embedded in the middle of the popular streets. Where people and cars circulate in traffic jam flavored with carbon dioxide. And where horn and shouting add to dry and stifling heat. Saturated by the noise of the crowd, we did not stay more than the scheduled night.

Next step, Uxmal. Change of dimension : the dizzying pyramid that marks the entrance of the place leads us to a large square surrounded by four long buildings particularly well restored. Mysterious doors, frescoes mingling gods and devils, our imagination adds the crowd that was rushing for celebration days ... or sacrifice ... Further, with distance befitting its role, the Governor's Palace dominates the scene and gives the measure of its probable political and religious power, historical forces, and still relevant!

Looking for one of the most beautiful cenotes of the Yucatan, we wander on very small roads. The opportunity to visit the “suburbs”, apparently very poor. Speed reducer and soccer fields sign arriving in each village, even the smallest. Some shadows shelter at the entrance of small houses sized concrete cube, hammocks swing, it's nap time in these sleepy hamlets. We improvise a lunch with chips and iced tea at a gas station, for lack of anything else or wanting to venture into the ultra-local, Bruno’s stomach is already in small state.
Finally joining a track recorded on our photocopy of pseudo-map, the sentence "it's straight ahead" makes sense. Mexican roads draw endless straight lines, and when it finally comes a turn to break the monotony, it’s indicated a kilometer before, pointed out through his curvature by unmissable yellow signs. Hard not to fall asleep and we take shift driving. 90km/h on roads or four-lane roads, 110km/h on the highway, nobody, our yoghurt pot flies!

To enhance our crescendo exploration of archaeological sites in the Yucatan Peninsula, we aim Chichen Itza. It's the star of postcards, where thousands of tourists throng to the foot of an imposing pyramid. As early as possible, we pass the gate of a secondary entrance, motivated to photograph this monument without contemporary character to erase later. Around us, guides chatter arriving quietly. Following stalls souvenir vendors that develop gradually, we finally lay eyes on the temple of the Mayan civilization. Almost alone to enjoy this enchanting place in a beautiful morning light, we appreciate the majesty of the place in total privacy! A short tour of the building provides an explanation of the incredible restoration that took place. Each face showing a little more restored, from the pile of stone covered by vegetation to the large square marches on the north side, direct access to another world ...
A ride on the rest of the site by the time the bus is discharged after several hours of travel for some, and we leave before the arriving of the crowd led by voluble guides, sated of these mystical beauties.

Mexico City stands in a few days and with the family: visit of the Centro Historico, its streets animated by visitors this Easter weekend, the tower for a panoramic view, the ruins of the city center, the local market ... A little further, we walk from the Revolution Square to Chapultepec Park, a welcome island of greenery which leads directly to the great museum of Anthropology. A little further south, the districts of San Angel and Coyoacán are bohemians, bourgeois, so “bobo” ! We walk around for hours into calm and cool streets shaded by walls of beautiful Mexican homes. Other people ...
About 25 miles north, the archaeological site of Teotihuacan is huge, set on an arid plain. There are emerging rocky foothills that surround the vast highland where was built in the Mexican capital. Suffering heat and pollution despite its location at 2400 meters altitude. Temples of the Sun and the Moon dominate this vast site distributed along the "Avenue of the Dead," probably too big to keep the charm of Coba and other popular Uxmal in the Yucatan Peninsula ...

Cancun : or how to move from culture to fiesta. Want to let it go a little, a lot ... Heading this ultra-touristic area focused on a strip of land separated from the city by a lagoon color of mud. A large lake hesitating between green mangrove and mud brown houses ... mexican crocodiles. Many signs along the road to signal the fact to oscillating morning revelers dangerously returning to their hotel, if they are still able to read ...
The hotel is international at will. But the most unusual is its noisy and mutant American community with a “beer holder” appendix living in the pool! Good humor is there, the extra pounds also tattooed, they are dancing 24 hours: that’s the local game.
At night we take the direction of Coco Bongo, famous nightclub including a very "Las Vegas" show. A shot of tequila quickly pushed at the entrance, and we're perspiring in the heat of the Mexican night and the accumulation of all these polyglot body restless by compulsive tremors under background bass and laser lights. Crazy night. Three o'clock in the morning, drunk by noise or alcohol, who knows, we go back to our bed, by taxi to avoid crocodile option!

Back at base camp, Thetys has not moved from its nice and chic marina, waiting for us wisely. Always pleasantly surprised by the friendliness of the Mexicans, and completely stunned by the prices here, we fill a few shopping carts of North American product to a shoestring budget.
We enjoy one last evening at "Playa" late time : from 22-23h, Calle 12 is filled with revelers slowly sliding from open bars to open nightclubs. All pour their music on the street at breakneck speed. Cups in hand, saturated by decibels and heat,  the packed crowd circulates, dance, jumps. The left ear does not beat the same tempo as the right, but the degrees of alcohol give all in a surreal cacophony. We love !!!

It is time to resume our journey towards the north of the Yucatan Peninsula and the East along the north coast of Cuba, to finally reach the Bahamas and premeditated grand reunion with our friends of the boat Milo One. The weather window is almost quite, the opportunity is too good to go and check what looks like the fight between Gulf Stream against late episode of north wind.
After a final night in the Mayan turquoise waters at Isla Mujeres, providential stop before the big sailing jump, we leave Mexico filled with strange sensations and a taste of “come back” !!! 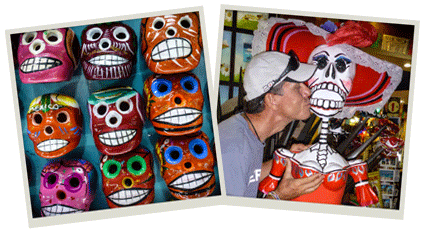 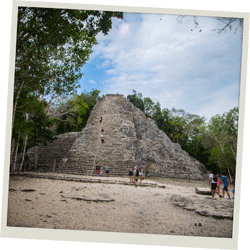 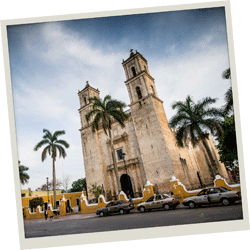 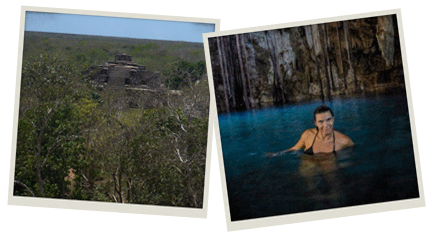 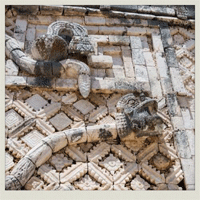 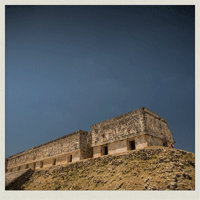 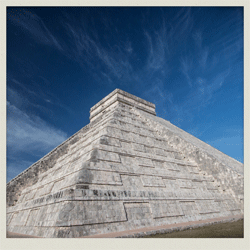 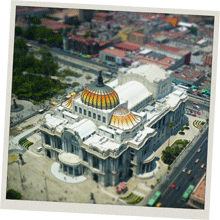 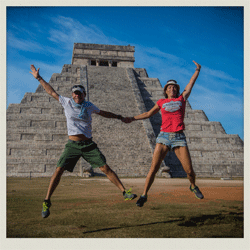